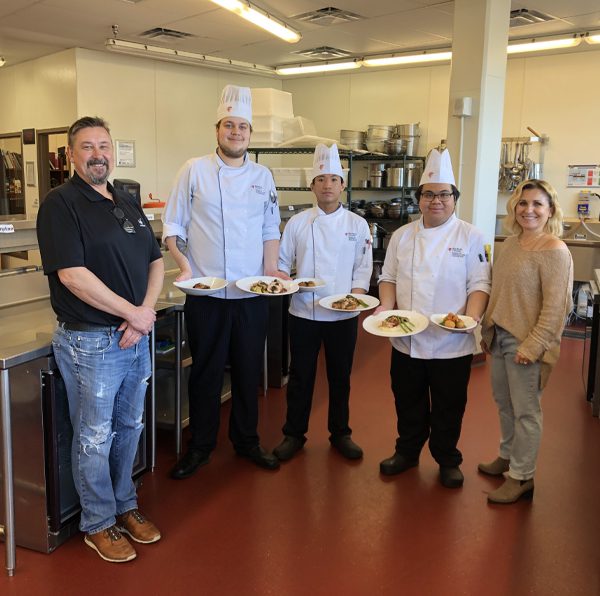 On Saturday, November 26th, six Culinary Arts students from Red River College Polytech School of Hospitality and Culinary Arts competed in the Manitoba Turkey Producers and Granny’s Poultry Iron Chef Turkey Cook-off! The competition was held from 8:00 am to 12:30 pm at the Paterson Global Foods Institute in Winnipeg. 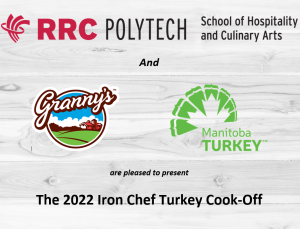 Unlike typical black box competitions, the students have many products, ingredients and spices at their fingertips to create a wide range of dishes. This year the students had just over three hours to choose from Granny’s Fresh Whole Turkey or Ground Turkey to use in an appetizer and entree where Manitoba-raised turkey was the star of the plate.

With no time to waste, the students were off and started creating their dishes. All students showed off their many talents – such as their knife skills – but also their passion for cooking throughout the entire allocated time. While the turkey was being sliced and diced, the judges were preparing next door and waiting to receive their first dishes to critique. 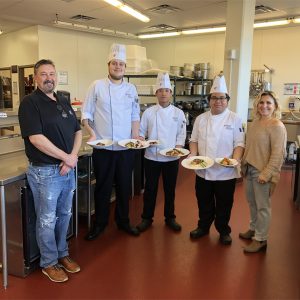 The judges this year were Chef Jeffrey Brandt (Red River College Instructor), Barclay & Shelley Uruski (Manitoba turkey farmers) and Stephany Opyc (Exceldor Cooperative). Everyone used the same rubric to judge the dishes for creativity, execution, presentation and taste. Before long, the first set of turkey appetizers arrived from the kitchen.

Plated with a five-star presentation, the appetizer round had several different inventive takes. A pulled turkey boa, turkey meatballs, some braised turkey leg, a couple of turkey croquettes and even some extra crispy fried turkey skin came from the kitchen and filled the room with irresistible aromas. Before long, the mouth-watering entries followed. Many delectable combinations of turkey roulades were featured along with a variety or roasted vegetables and tasty and creative potatoes.

After the chefs cleaned their kitchen space and after much deliberation between the judges, the top three students were chosen:

For the tight race of third place, Charles took the bronze and prepared a turkey croquette with a cherry sauce as his appetizer. He then served the judges a mushroom white wine sauce topped turkey roulade with cashew and apricot. The turkey was served with roasted asparagus, mashed, and garlic pomme puree.

Second place was Erron who served the judges turkey two ways for his appetizer. Erron’s turkey croquette was topped with a siracha turkey and it was all served in a braised sauce. Next up was his turkey roulade served with shallots and apples in an adobo glaze. Next to the turkey was fennel, roasted asparagus, pickled red onion, and potato puree.

And… drum roll please… first place went to Jackson who swept the competition with his braised turkey leg with potato cake and confit tomato appetizer. Judges kept coming back for more of that turkey drumstick but his entree soon followed. Jackson’s turkey roulade was made with spinach and duxelles. He served his with roasted squash, charred shallots, and roasted potatoes.

All students went home with a gift basket loaded with goodies but the top three will be awarded $1,000, $750, and $500 from Manitoba Turkey Producers and Granny’s Poultry to go towards their tuition. This competition has been hosted at the College now for over 20 years and has always been a great success and this year it couldn’t have been done without Chef Karl Oman. Chef Karl is a Red River College instructor and was the organizer of the competition who was able to provide his students with the opportunity to practice their culinary skills and earn a sweet reward. Students also had the opportunity to show off their creativity in inspired dishes – all of which feature a versatile, locally raised protein that incorporates into a multitude of delicious dishes that are so much more than just your traditional holiday dinner. Stay tuned to get their recipes and make them at home yourself!